• What tends to happen when a woman suddenly stops chasing a man? 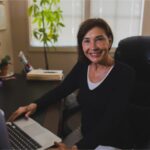 There are 3 scenarios of what can happen when a woman stops chasing a man.

#1) The most common response from a man when a woman stops chasing him, is that he becomes the pursuer. This dynamic is based on the history of human kind. Men have been the hunters and women the receivers. If a woman has been too available to a man, he often thinks there has to be something wrong with the woman. Thoughts like” Is she too needy?” ” Is she desperate/” or”something feels out of balance here.” Somewhere deep inside he may enjoy the attention so when the woman withdraws her energy, he may actually start to realize that he has feelings for her. The saying that ” Distance makes the heart grow fonder” seems to usually apply to the male species. For women, distance makes them detach and begin to look elsewhere. If you add up these traditional roles of hunter and pursuer, the most likely benefit for a woman to stop chasing is to let him feel that he misses her and it may bring him around.

#2) The second response may be that the man may feel relief. She may have been chasing him because he was not as interested in her than she was in him. There are definitely some woman who want the guy who is unavailable, emotionally, physically or because they are in a relationship. These women usually like the safety of distance being already built into the relationship. In the book, The Dance of Intimacy” Dr. Harriet Lerner describes how people are comfortable with a certain amount of distance in their relationships and that humans tend to seek out people and relationships with whatever distance is comfortable for them. Thus a woman who feels safer with more distance, will go after a man that is aloof, or unavailable because of his commitment to someone else or his relationship issues that have caused him to create distance in intimate relationships. Men typically do not want to hurt women so he may not have been as clear with his disinterest, so that when she backs up, he breathes a sigh of relief.

#3) The third result may be that the woman has stopped chasing because she sees that there is no possibility of a real match. She may be the one closing the door, permanently. It is interesting to note that woman have a tendency, historically, to give a relationship a longer chance to develop or improve. Once they realize it is not what they thought it was going to be, women are notorious for closing the door and bolting it shut. A man may come back around to see if they can salvage the relationship, if the woman has made a definite decision that this relationship is wrong for her, the woman does not even give him a chance. Men are often surprised at how decisive and unbending the otherwise open woman has become towards him.

In any event, chasing anyone seems to have its drawbacks. Developing a friendship and establishing trust with another person gives a couple a better chance of a lasting relationship.

© 2023 www.relationshipsarecomplicated.com and its licensors. The material appearing on this site is for educational use only and should not be used as a substitute for professional medical, legal or financial advice, diagnosis or treatment.